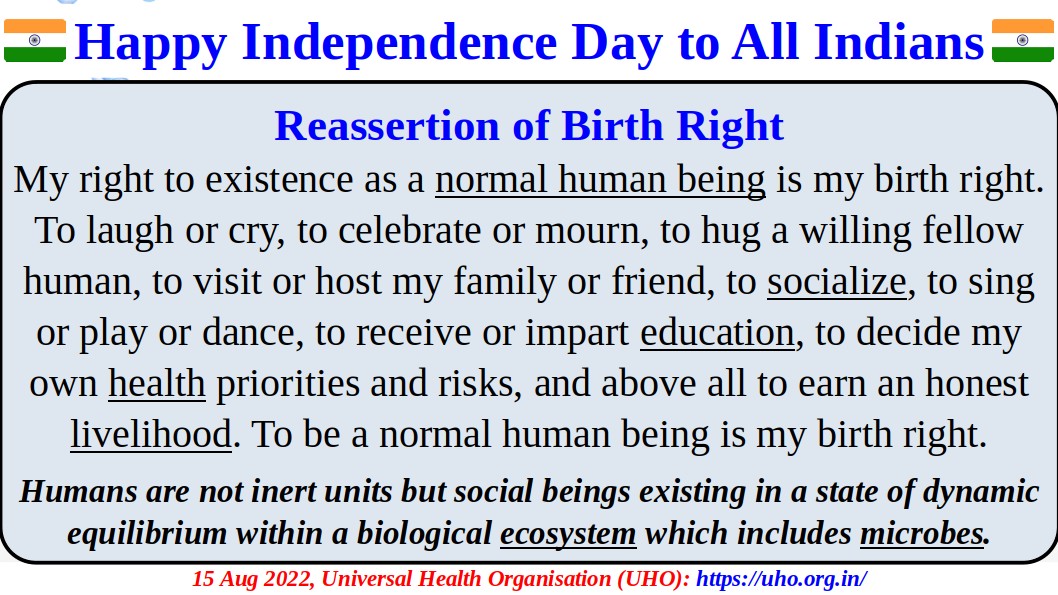 About UHO Write for UHO

Do lockdowns save lives or crush lives? Is Mass Testing-Tracing Warranted?

UHO is a forum to ensure impartial, truthful, unbiased and relevant information on health reaches every citizen of the world to make informed choices pertaining to their health.

To have a world society where people are healthy through natural means, making healthful choices, to have a right to seek healthcare with full freedom and liberty of their bodily autonomy.

UHO's mission is the advocacy of public health principles and procedures; to play the role of whistleblower instances of violation, bring to public focus/attention issues concerning their health.

Global Health policies and healthcare delivery must always be guided by following principles:

The need for an independent health organization free from various conflicts of interest was felt during the Covid-19 pandemic which was declared in 2020 by the World Health Organization (WHO). The pandemic which got prolonged throughout 2020, and also continued through 2021 into 2022 exposed number of fault lines in the public health policies and their implementation in almost all countries of the globe.

In the initial phases the pandemic response was driven by draconian measures commensurate with their country of origin, China, known for total disregard for human rights and freedom. However, what was surprising is that country after country, most of them democracies, adopted these harsh measures, which was unwarranted given the self limiting and mild nature of the novel coronavirus particularly in young and healthy people and children which became apparent a few months into the pandemic.

Even more intriguing was the culture of censoring all alternative views without scientific debate, which was contrary to the so called "community guidelines" or "medical consensus" by social media like YouTube, FaceBook, LinkedIn and others. In most instances some of these "community guidelines" or "medical consensus" propagated by World Health Organization, US CDC, and others were contrary to known science. It became apparent that as the pandemic prolonged, pharma-driven marked forces piggybacked on the initial authoritarian and repressive measures. Career scientists and opportunistic politicians jumped on the bandwagon.

Against this background, there is a need for setting up an independent think tank and a platform for exchange of scientific discourse free from any conflicts of interest such of career scientists, opportunist politicians, people with financial stakes and others. Toward this, there are three important pillars for the Universal Health Organization: Transparency, Empowerment and Accountability or TEA.

Transparency has been lacking in the present pandemic. Important data which should drive evidence based policy pertaining to Covid-19 is not in the public domain. Alternative views even by scientists with long years of experience and subject expertise got censored. Even reputed medical journals have erred and do not seem to be free from influence of vested interests.

One of the objectives of the UHO is to promote transparency. This would be achieved by directly putting sound collated data and information with implications, if relevant, in the public domain through the website of UHO, and indirectly by attacking opacity and enumerating flaws, if any, in the mainstream data and information. At the same time, UHO would be open to debate of its viewpoints as well as discussions on other points of view. The ethos would be of collaboration rather than confrontation. The UHO would be receptive of viewpoints from all quarters and the same would be welcome. Important and sound inputs would be curated and put up on the website with due permission and acknowledgement of the source.

The people of most countries during the pandemic were treated like schoolchildren in a patronizing manner. Over the course most lost their critical thinking abilities and blindly trusted CDC, WHO and government policies without questioning them even when some were without scientific or logical basis. One of the important tasks of the UHO would be to empower the people by access to robust data and information and also exposing the cracks, if any, in the unquestioned mainstream narrative. High integrity of disseminated data and information would be the goal. Uncertainties, wherever they exist, will be highlighted, which will give the scope for research to resolve them rather than blindly relying on opinion of dubious experts. The same high standards of data and information integrity, will be ensured of any content put up on the website by UHO. We will be quick to accept any lapses and errors if pointed out by better data and information and correct them with due notifications. This would be a dynamic and ongoing process.

Accountability has been the third weak link in the way the present pandemic has been handled. Scientists, government officials, politicians, and others like those cancelling honest scientists on social media seemed to be having an "innate immunity" to accountability. While the UHO would not be having executive powers, by promoting transparency and empowerment, it would to some extent be able to identify the people who have committed acts of omissions or commissions. Experts in law, bioethics and those knowledgeable about procedures such as how to file an application under Right to Information Act, would play a major role in this objective. They would also guide on ways to take things forward by public interest litigations or filing FIRs, if required, in case any gross misdemeanours surface. It is believed that even the existence of UHO as a watchdog and a tool for moral policing would act as checks and balances against gross misuse of power and the authoritarian ethos which has taken roots in most countries.

UHO activities will consist of various means of encouraging healthy discussion and debate of views and counterviews. These will be through writeups, oral debates, workshops, etc.

The following calls for debate are currently open.

The Universal Health Organization (UHO), was conceived during a two day workshop at Bangalore, India, on 26 and 27 February 2022. This was attended by doctors and professionals from different disciplines from across India. Dr Peter McCullough and Dr Gopi from USA also gave their inputs.

The workshop deliberated on the need for UHO, its structure to keep it free of funding influence, and its possible activities. The workshop culminated with "The Bangalore Declaration" which stressed on three important pillars for the Universal Health Organization: Transparency, Empowerment and Accountability or TEA.

Note: Opinions of UHO members are personal, and do not represent those of their organizations.